Tourism in the province of València

Torrent is well connected by road with the other municipalities of the region, although the most significant axis is the AP-7/E-15 motorway or section South of the ring road of Valencia (bypass) motorway. This route has two entrances to the town centre and the industrial estates. From North to South, are: CV-410/more of the Jutge-Calicanto and CV-405/Camino Real de Montroi-Vedat. The CV-33, North of the municipality, connects with the Autovía A-3/E-901 Madrid-Valencia and, to the South, links to Picanya and Catarroja, Albal, Valencia. Torrent there are three Metrovalencia connecting lines 1, 2 and 7. It also has the line 170 bus linking Torrent with Valencia. For transport inside the city, Torrent has a service of bicycles (TorrentBici) and bus (TorrentBus).

cassola Sant Blai is the tradicional dish in Torrent. Although Torrent as a town within the region of l´Horta, it is inevitable that their dishes are as stellar ingredient for rice in almost all its variant and their different combinations it is important meat paella and  vegetables as well as the traditional arròs amb fesols i naps (rice with beans and leeks).

It is an industrial city in the region of l’Horta, which has become in recent years one of the cities most populated of the Valencian geography. The Arab Tower, located near the metro station, is the most important monument of Torrent and is of medieval origin dating specifically from the 10th century. It’s a defensive building, its current appearance is excellent due to his recent rehabilitation.

The Museu Comarcal de l’Horta Sud Josep Ferrís March is a centre of conservation, research, and exhibition of cultural heritage of the region, involved in the social and cultural revitalization of its territory, on the basis of those elements that have historically defined the personality of Horta Sud and constitute its signs of identity.

Also has in its festive calendar with two renowned festivals of regional tourist interest such as the fallas and the Holy Week.

The Serra Perenxisa was declared natural park Municipal by agreement of the Council of the Generalitat of 10 February 2006 constitutes a natural redoubt that offers citizens of Torrent and surroundings a next chance to enjoy a natural area close to the metropolitan area. The site hosts primarily constituted by scrub vegetation, and a layer of white pine combined with small groups of Oaks, garroferas and olive trees. As for the fauna, it is their own formations of pine forest, we can find species of mammals such as the Fox, the European Hedgehog, pig boar, bats, lizards, snakes and a significant representation of Mediterranean birds: tits or the Hawk among others. In the local context, its landscape value is very important, being a basic element in shaping the landscape of Torrent. In addition, from its summit you can enjoy a magnificent panoramic view of the Valencian coastal plain, with  the Albufera as most prominent landmark.

El Vedat mountain is the elevation of the term from next to the sea and the town Torrent, represents a next to the 49 Ha surface and comes as maximum dimensions to 143 m in the balcony of el Vedat and the 132 in the turret. The vegetation of the mountain of el Vedat, responds to the Mediterranean forest, which constitutes the potential vegetation of the area by climatic conditions, the proximity to the sea, the composition of soils and rainfall.

This vegetation has disappeared almost completely from the area, and has been replaced by the arboreal layer of white pines and scrub.

Here you can read the guide of natural spaces of Torrent

On February 1 Torrent celebrates the Entrà de la flor. Three cultures are mixed: the Greco-Roman represented by the presence and the worship to the branch of almond as welcoming of spring; Islamic culture represented by the presence of gunpowder, fire and noise that accompanies the branch during the trip; and the Christian culture, heiress of all the previous tradition, represented in the devotion and worship to the Virgin of the Rosario. The day begins with the cutting of the branch of almond trees flourished at 8 in the morning, clavarios and Torrent neighbors go to cut the branch that the evening would offer to the Virgin of the Rosario, then, convey it to the parish of Sant Lluís Bertrán where it will be up to the celebration of the log. Once collected rockets, all participants in the go go to the parish of San Luis Bertran, where they make a little prayer. At 21.00 h, starts the Entrà de la flor, and thus from the parish of San Luis Bertrán almond tree branch sets off accompanied by sound and light firecrackers to reach the parish of the Asunción de Nuestra Señora where the blessing of the branch is made and offered to the Virgin of the Rosario. Finally, the cordà is celebrated in an enclosure. 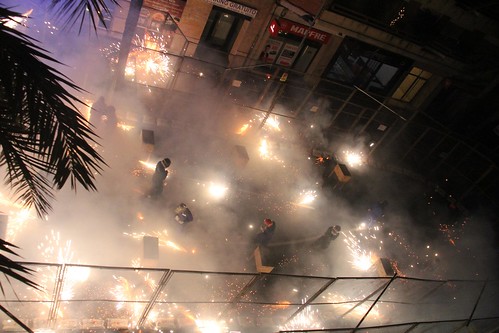 Torrent celebrates the cult to Saint Blaise on February 3. The celebration begins early in the morning in the Ramón y Cajal street. During the mass, the classical gaiatos that are sold at the door of the Church are blessed. The procession involves children (3-5 years) and the brotherhood of Saint Blaise, accompanied by music of tabal and dolçaina. The reason that only involved children is historical; Saint Blaise cured a child while he was in prison. In existing continuous Torrent the custom of putting oil in the throat making the sign of the cross to cure sore throat. It is common to recite the saying “Sant Blai gloriós, cura’m la gola i lleva’m la tos”. 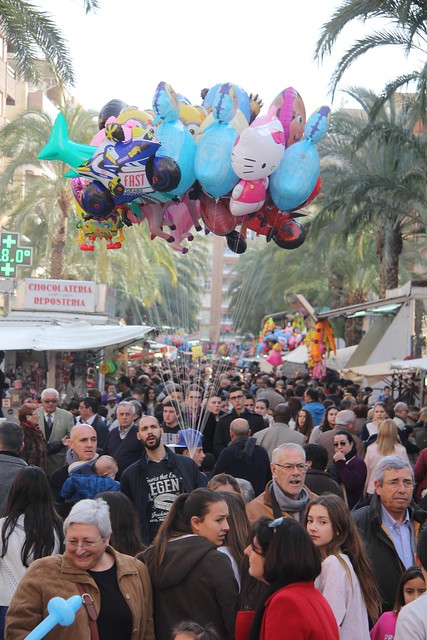 The fallas of Torrent are a festival declared of Regional Tourist Interest by its proven age with more than 100 years of history, the roots, cultural value and tradition as well as singularities of the festival, such as the traslado de la Virgen or the succés de la tombà  of of the fallas in 1957. More than 7,000 falleros work 365 days a year and offer a periodic schedule extensive cultural, sports, leisure and broadcasting for the citizens and visitors in the city. Torrent fallas also were declared property of Cultural Interest, along with other towns fallers with more seniority. 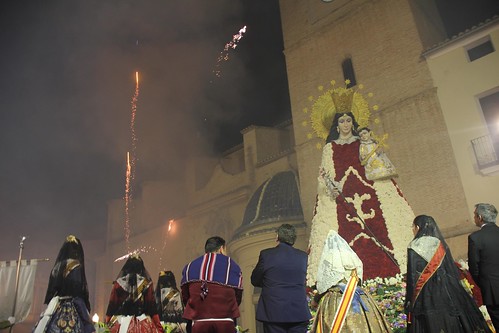 The Holy week’s Torrent is one of the most important celebrations of the city, Holy week in Torrent has the recognition of Regional Tourist Interest has received this distinction, by the unique figure of the Reina del Encuentro y Ángel de la Resurrección, maximum representative of the Holy Week in Torrent. Resurrección on Sunday, the Queen is responsible for preaching the resurrection. and carries a banner with the inscription “Aleluya” in their hands and accompanied by the two waitresses and numerous pages that bring you the huge tail of dress.  At the time of the meeting, the Queen proclaims with loud voice and poetry: “Christ is risen Hallelujah!, Hallelujah!, Hallelujah!” At this moment the Virgin take the black veil and the purple layer covering it, opens the artichoke which fall many hallelujahs (some papers with a satire about the city), as well as from the balconies of the houses. Reina del Encuentro y Ángel de la Resurrección  is elected with rotational order among the brotherhoods. 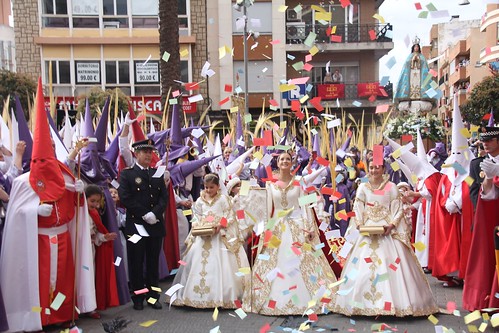 Celebrations for a town’s patron saint, Abdon and Senen

In the month of July are celebrated the festivities in honor of Abdon and Senen, two Persian commanders who were defeated by the troops of the Roman Empire and forced to sacrifice to the gods, to which they refused, proclaiming the divinity of Jesus Christ. They were tried in Rome, where Decius made them enter it loaded with chains, walking in front of the triumphal chariot. They were sentenced to death for following Jesus Christ, but had actually been caught prisoners for bury in their properties to Christians who were left unburied. Beheaded by order of Decius, were given burial on July 30 of the 250 year in the cemetery of Ponciano.

In Torrent this devotion will not charge special importance until the 19th century, as previously it was one of many festivals celebrated by the clavarios. This devotion was growing among the population and the city of Torrent, The city hall was in the Plaza de la Mota and agreed to request the patronage of St. Abdón and St. Senén and made the vote annually pay a party in honor of Saints. The Church granted the patronage and is has been celebrating with more or less splendour and sometimes delayed, except in periods of the two Spanish republics. In 1948, the Town Hall of Torrent requests ecclesiastical authority that it be declared precept on July 30, feast of the patron saints. The Authority agreed, and since then the Saints Abdón and Senen, the stone Saints, are the patrons of Torrent. Although devotion declined in the following years, in the mid-1970s was given a new impetus to this celebration of the feast of the Saints Abdon and Senen as patrons of Torrent. It has also helped to give greater participation the creation of the Festival of Moors and Christians of Torrent already in the 1980s. 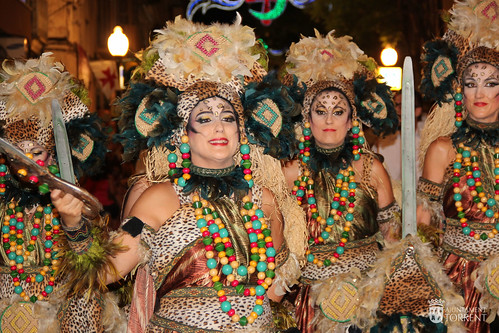